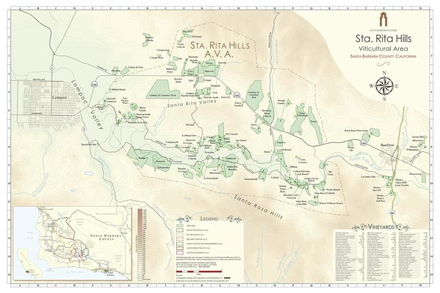 Click Here to view Jeb’s reviews of our wines

California’s Santa Barbara County is a huge, diverse region that delivers everything from crisp, refreshing whites, savory Pinot Noirs, peppery Syrahs,  and concentrated, structured Rhône and Bordeaux variety blends. Given this incredible diversity, it’s critical that consumers understand the different regions and what each delivers.

Each region has a distinct climate, driven mostly by its distance from the Pacific Ocean, as well as a focus on different varieties.

The Santa Maria Valley AVA is in the northern part of Santa Barbara County and is a west to east- running valley influenced heavily by the Pacific Ocean. The prime grape varieties here are Pinot Noir and Chardonnay, yet there’s a number of brilliant Rhône variety blends as well.

The key vineyards are Bien Nacido, Solomon Hills, and Sierra Madre, with other notables including Riverbench, Le Bon Climat, Dierberg and Cambria. The Sta. Rita Hills AVA lies south of Santa Maria (and the Los Alamos Valley) and is a west to east- running valley open to the Pacific on its western edge. This is a cool, marine-influenced region that warms the further east and inland you go. It’s primarily Pinot Noir and Chardonnay territory, yet it’s possible to ripen Syrah (and even Grenache) on its eastern edge.

In general, the Pinot Noirs from the Sta. Rita Hills show a savory, structured style (especially when compared to example from the North Coast and Santa Lucia Highlands), with loads of spice, red fruits and dried herbs character. Located to east of the Sta. Rita Hills is the Ballard Canyon AVA, a tiny appellation covering roughly 550 acres mostly planted to Rhône Varieties. This north to south-running valley starts at an elevation of just over 500 feet above sea level in the south and tops out at 1,165 feet at its northern border. The soils are limestone dominated near the bottom (Kimsey Vineyard) and become more and more sandy as you progress up the valley. The Los Olivos District AVA is a newly created AVA that stretches from the eastern edge of Ballard Canyon to the western edge of Happy Canyon. It’s slightly warmer than the Ballard Canyon AVA, and cooler than the Happy Canyon of Santa Barbara region located to its east. This region specializes in the Rhône varietals of Syrah, Grenache and Mourvèdre. Lastly, the Happy Canyon of Santa Barbara County AVA is located on the eastern edge of the Santa Ynez Valley AVA and is the warmest sub-AVA of the region. This is Bordeaux territory and is primarily planted to Cabernet Sauvignon, Cabernet Franc, Merlot and Petit Verdot, with a small amount of Sauvignon Blanc. *All maps were provided by the Santa Barbara County Vintners Association and can be found at http://www.sbcountywines.com/ava-maps.html